By Kind Permission of
The Searcher Magazine

WE’VE BEEN DETECTING for quite a few years now. Readers of The Searcher will have seen Brian’s articles, and it could be said we’ve had a reasonable amount of success at detecting taking into account the difficulties of the area where we live. Cheshire is notorious as being a poor county in which to detect. It really is hard work here! 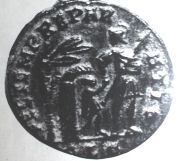 So, during the past few years we have taken to jumping into the car, very early in the day, and travelling to more promising parts of the country. It makes it tough for the driver faced with a two or three hour journey to the site, eight hours detecting, and then another long journey home. But we’ve done it many times simply because, in this way, we always have the chance of finding something worthwhile every trip … not the usual feeling setting foot on our familiar Cheshire sites.


Jumped at the Dodge

In March 1988 we began to look for some sort of caravanette so we could make more of these away trips and find them less exhausting. We had plenty of usable time, Brian working shifts, and we were beginning to spend too much money staying over for the odd night or two so that we could get an extra day on site. Good fortune gave us the chance of buying a Dodge Caravanette. We jumped at it.

A week or two later saw us on Humberside with Mal and Jean Jubb having a look at some productive Roman sites, with varying degrees of success. We thoroughly enjoyed this time with Mal and Jean, and were reaping some benefits from our van, now dubbed “The Red Rocket” to make up for its lack of interest in any speed greater than 65 mph.

A problem of Humberside is that detector users from a large surrounding area tend to travel to the same well-known sites. It seems that many are not interested in research and tend to go along to the sites that feature in work-of-mouth descriptions. Nowadays the best these sites have to offer seems to be grotty fourth century Roman bronze coins.

We found a number of these and little else despite working for many hours in very bad weather. We also found a number of landowners not too welcoming and can only presume they have become a little tired of constant requests for permission to search. We decided to try elsewhere and as Brian had just brought out his first book on Roman sites we decided that we would sample some of this research at sites further afield, spending four or five days away from home – after all there were more than 1,000 to choose from. Our next trip was to Anglesey where we had very little luck despite trying many sites that appeared to be excited. We tasted the idea that the Welsh never used money, but concluded that much of the land we tried had been pasture for very many years.

A later trip took us to Cumbria, and while this was more a sight-seeing holiday, we did find a hammered coin on the beach at Ravensglass and ten tons of musket balls – an interesting place we thought worthy of a lot more research. Another trip took us to Cumbria again, this time in the company of a long-lost friend, Eddie Bolton of Southport Electronics, who had just bought a caravan, seemingly straight out of Dynasty.

Our old friend is now known to us as “Super Pitch” he always managed to get the best pitch – he even found one with Sky TV on tap. This trip produced a beautiful hammered of Edward III for Brian and masses of Georgian goodies between the three of us. We were really enjoying our new can because it enabled us to stay away and detect for long and leisurely periods without having to dash 200 miles or so back home at the end of each day.

Our next five trips were on our own. Brian’s shifts made it impossible to meet up with Eddie, or anyone else for that matter. We had masses of research material, most already published in Brian’s books, and we decided to investigate some of the lesser know sites. When we called at our first selection from Brian’s Roman book we were amazed to find that never before had the farmer been approached by a detector user.
A ‘yes’ with interest

We explained what we were up to and told him of our research results. He was surprised to hear what we had to tell him, and was happy to allow us to investigate further. We parked the van on site and headed off into the field. Within five minutes Mo found a fourth century Roman bronze in good condition. Our spirits were high.

Brian was very lucky in that during the next hour or two he found two hammered coins, a feat he had not achieved before in such a short period. One coin was Elizabethan, the other was a short cross penny. Darkness overtook us and we much appreciated that if we hadn’t had the caravanette we would have been heading home by this time, not knowing when we might be able to return.

As it was, we were able to park right on site. Sitting there with a bowl of cereal we talked about the exciting finds, examined our slummy and imagined the fabulous items that would be brought to light the next day, having ten or twelve hours in which to “play outside”. What followed the next day was as uncannily disappointing, for although we patiently marched up and down that field, not another find of any significance came from it. We didn’t know whether to put it down to temperature, for it was a scorching hot day, ground conditions, or even lack of concentration. We thought we were concentrating like mad, enough to cry those hammereds out of the ground. But to no avail. A day or two of site reconnaissance ended this trip. The site was to be cropped before our next trip planned for this year.

Anyway, we’d had some luck with our new tactics: in addition to Brian’s finds. Mo had plenty of interesting bits including the 14th century stirrup buckle shown, which unfortunately broke on retrieval. We planned our next trip deliberately avoiding well-known detecting spots. Using the published research once more we chose places which mentioned Roman pottery kilns, the finding of a few coins, or bits of Roman stone or pottery, in fact anything giving clues of Roman activity in the area. We also tried to pick those spots where there was offered a full six figure O.S. reference. With the help of a good scale Ordnance Survey map this would enable us to pinpoint single fields. We expected this would save us much foot slogging and days spent in selecting the optimum area when confronted with ten or twenty fields.

It was on our next trip that we seemed to hit the jackpot, within half an hour of arriving at the very first field selected by this method. It was late in the evening and we had just obtained permission when the heavens opened. Brian, the eternal optimist, got togged up with the comment “There should be a good chance of finding hammered here”.

Half an hour later Brian was fifty yards from Mo when he heard a shout, and went to see the Scottish hammered she had found! We searched the same field the next day also, but it produced only Georgian and a few earlier copper coins. Funny how often this happens – you walk into a field and find what might well be the best object there before putting in hours more of blank searching.

The following day we got permission to search a huge field right next to the site of a deserted medieval village, now under grass. The humps and bumps of medieval crofts and tofts could be seen very clearly, and this was our first look at such a site. The day was very hot. We were allowed to park the caravanette right on the field, and we couldn’t get out quickly enough. But we were wasting our time, finding nothing of any interest. We concluded that the field must have been left fallow in later times, or was taken over by woodland. It certainly did not appear to have been farmed.

Roman pottery was the magnet for the site chosen as target on our next trip. The reports of finding Roman pottery originated from many years ago when the evidence turned up as a result of drainage operations. Local archaeologists had deduced that nothing of any consequent existed there. We plotted the co-ordinates on the map and the farmer confirmed our research, giving us permission quite readily.

Obtaining accurate OS co-ordinates proved its value once more. Because we had done our homework we were able to drive straight to the field and, ever watchful as we went, go directly to that area of the field where the pottery finds had been reported. How pleased we were to find Roman grey pottery confirming the very spot.

Our searching produced numerous bits and pieces, broken Roman bronze fittings and so on, and this lucky day also supplied our first Roman fibula complete with pin. This site also gave us the silver denarius of the Republic minted by moneyer Marius. It shows many nicks where, we imagine, it was tested for silver quality by merchants and others accepting payment. Such finds made the trip well worth while and we headed home perfectly content.

Now it seemed we had found the recipe for making interesting finds. We’d keep to the smaller, lesser known sites, taking advantage of being able to stay overnight, and working consistently for one or two day. This was the magic factor, and our experience to date had told us just how often it was possible to have a completely blank day on a site, and to write it off, when another day might tell a much more exciting story. Without “The Red Rocket” we could have expected many more disappointed journeys home from seemingly barren sites. 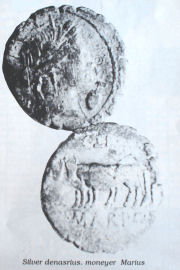 Picture of BC Denarius

All of the sites were culled from Brian’s book More than 1,000 Roman Sites in England, Scotland and Wales, and none were sites listed as areas of archaeological importance or interest.

Our trips continued towards the close of ’89 with interesting finds. There will be more about the travels of “The Red Rocket” in later instalments. 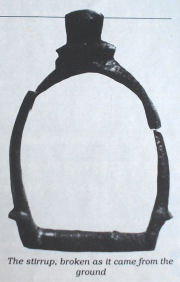